Plenty of cities stake a claim to being the yachting or sailing capital of the world, from sunny Fort Lauderdale in Florida to sedate Annapolis in Maryland, while cities such as Monte Carlo, Empuriabrava, Singapore and Dubai all vouch for having some of the largest marinas and biggest yachting scenes on the planet. Yet perhaps the real yachting capital of the world is somewhere with rather cooler climes, where getting in your boat, dinghy, yacht or sailing ship and setting out across the waters is a part of everyday life. It happens to be Stockholm, the Swedish capital and arguably Scandinavia’s most stylish and slick city, that is the real yachting capital of the world, and here are a few reasons why. 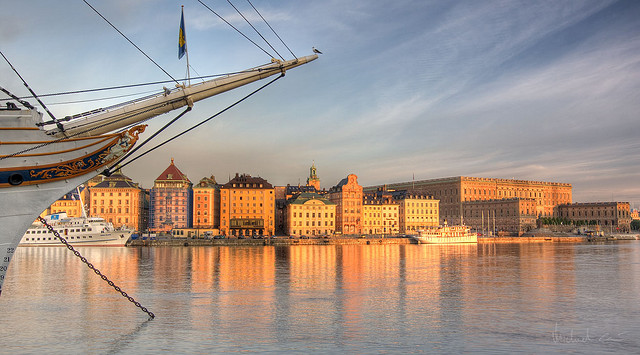 One look at a map may tell you why yachting and boating are so popular in the Swedish capital, and that is because the municipal area is made up of around 24,000 islands and islets, collectively known in Swedish as the skärgård archipelago. Overall, around 30% of the city’s collective area is constituted by water, and many in the region dub Stockholm the Venice of the North. The centre of the city itself lies on 14 major islands, but it is to the smaller islands, many rocky outcrops barely big enough for a few visitors, that most people like to travel to, for a bit of peace and quiet, and utterly gorgeous natural surroundings. And nor is boating here merely a leisure activity, as many boat-owners in this salubrious and well-heeled city use their boats to commute on a daily basis. And even if commuters do not have access to their own boat, tens of thousands of people travel to and from work each day on the regular Waxholmsbolaget ferries that ply the waters of the city, while travel to cities as far away as Helsinki and Turku can be undertaken on larger, overnight ferries.

Scandinavia leads the world in the amount of boats owned per capita, and Sweden comes top of the global rankings, with one in seven people owning their own boat. And whether they have a small rowing vessel moored to their own private yet modest jetty, or a more lavish and expensive super-yacht permanently berthed near the city centre, Swedes just love their boats. Go out on a sunny weekend and the waterways surrounding Stockholm will be full with people setting sail and enjoying the weather out in their boats. And even those who do not own a private vessel can easily and inexpensively hire a yacht charter to take them out for the day, or even longer, a favourite past-time for urbane Stockholm residents seeking to get away from the busy city.

Stockholm is one of the most fashion conscious cities in the world, and any visitor here is likely to be stunned at the sheer sophistication and élan of the locals, who all seem well groomed, well dressed and well spoken. And so going out on hired boat charters on the weekend seems like a natural extension of this style conscious attitude, knowing that setting sail on a stream-lined, vintage yacht or sailing boat is one of the most stylish ways to enjoy yourself.

Stockholm, and indeed Scandinavia as a whole, benefits from ample marina space, so you will never have to struggle when searching for a place to berth for the night. And, with so many people interested in sailing, there are a huge amount of boat builders in the region, set up to meet demand, many of whom are known to produce the finest and most elegant yachts on the market.

John is a travel writer who has penned articles on subjects such as locating the best boat charters in Hong Kong and where to go for the most stunning scenery in Britain.

Sailing is a fun and challenging activity enjoyed by many. It is a form of recreation which requires a high level of skill. While not many are able to afford their own boats, there is no reason why this activity should not be accessible for those even on a budget. In fact, these days there are boats that can be chartered for a short time to make sailing activities more affordable and enjoyable without worrying about costs. Since there are risks involved with sailing, it is necessary to undergo a yacht masters course to become competent in operating a vessel. There are different courses that will tailor fit the need of the person who wishes to be trained in sailing.

There are many sailing schools that offer courses for interested sailing enthusiasts. It is important to differentiate and understand what you are looking for in terms of a yacht masters course to ensure that you are making the most out of your investment. Look for courses that have the least student to teacher ratio. Since you will experience sailing firsthand, you should look for schools that have the best and the latest facilities and vessels. If you are a beginner, look for a yacht masters course that will provide you with the basics in day skipper training where you will learn how to man a vessel during the day and in favorable conditions. There are advanced training to fine tune your existing sailing skills as well.

If you want to achieve a certificate of competence, find a training program that is facilitated by RYA yacht master experts. RYA sailing training programs that will immediately lead to a certification examination is also ideal. The students will be trained in offshore and coastal yachting skills through various RYA sailing training programs. Oftentimes, accommodation on board the vessel will be provided by the school. If you are not comfortable sharing cabin accommodations with other students, you can opt for a course that provides students with individual cabins inside the vessel, but be prepared to pay for such a luxury.

There is information on the internet that will connect you to some of the best yachting and sailing schools in your area. You can research as much as you can if you are not sure of what course you are interested to take. Assess your skills and decide on the areas you need to improve. If you really want to take sailing as a serious form of recreation or hobby, you will greatly benefit from certified training courses for yachting and sailing.

Rooster Sailing is an online & offline chandlery that specialises in supplying dinghy sailors.

Saturday 19th dawned bright and clear, the first sun for a few weeks! Sharing the weekend with Fireballs, GP14’s and Hornets the Merlin Rockets joined in the fantastic sight of 70 boats leaving the club for the race area in the Colne. With a gentle force 1-2 southerly greeting the 20 Merlins race officer Phil Rust and his team set the course and with the tide just starting to ebb had the first race away on time and, without a general recall (rare for the eager Merlin fleet!). With several shifts up the first beat keeping the fleet guessing Andy “Taxi” Davies and Tom Pygall (national champions) rounded first with a chasing pack including Dave Winder, Jon Ibbottson, local Dan Willett, and legend Jon Turner in hot pursuit. Due to the light winds and ebbing tide the reaches ended up being fairly broad and those going high (including Turner trying to defend) lost out heavily running into the gybe mark. The tidal gate then spread the fleet on the next beat and places stayed much the same until the finish, ending with Taxi followed by Dave Winder and Jon Ibbotson

Second race again started first time, with fickle shifts up the first beat and the few opting for less tide lost to those heading into the stronger stream. At the top mark Nick Craig lead, with Willett, Ibbotson and Will Rainey in close company. Downwind Craig lost out letting Ibbotson go through to take the lead and the race win with Willett second and Craig holding onto third.

Everyone headed back to the shore and a great welcome from the home club, especially in the form of curry/bolognese washed down with a few “bevvies!” Evening entertainment followed with live action from the Champions League final not to mention James Stewart (Nick Craig’s crew and Chelsea stalwart) amusing others with his celebrations!

Sunday started with a fresher F 3-4 breeze from the north. With Sunday being the actual Silver Tiller event two more boats brought the fleet numbers to 22.

Again, away first time, the third race had a number of boats swapping the lead, with the combination of course layout and breeze making for tighter planing reaches – putting grins on many faces! At the finish Taxi lead from Nick Craig and Will Rainey.

The wind dropped slightly for the fourth race and again most of the fleet headed right into the slackening tide. Dave Winder and local Dave Charlton crewed by Ozzie (his first crewing for many years) both hit the left corner of the course, got the ideal shift and came in to the top mark in first and second. In close pursuit were Taxi, Ibbotson and Jon Turner although a swim at the bottom mark unfortunately dropped Turner from the leaders! Tactics changed as the tide turned and the left hand side of the course became the favoured option, with Dave Winder extending his lead throughout the race for a comfortable win, ahead of Taxi, and Jon Ibbotson.

The final race started with the tide now ebbing fast and again a clean start – no recalls in a Merlin Rocket Open!!!! The pack headed left but with 20 degree shifts a lot of “snakes and ladders” occurred. Jon Gorringe and Toby Lewis headed the fleet with Nick Craig, Jon Ibbotson and Will Warren in close pursuit – a helpful gust stretching all four of them from the rest. With the top mark becoming an assault course as the Merlins lapped the tightly bunched GP14 fleet struggling with the tide, a swimming GP14 sailor must have been more than a little scared as the fleet bore off onto the run around him! Jon Gorringe enjoyed the sight of the shortened course flag after 3 laps, winning from Nick Craig and John Ibbotson.

Congratulations to the race team for running the 4 fleets really well with great courses throughout the weekend, and also to the organising, galley and bar teams who did tremendous work behind the scenes to make the whole event such a success.

With 4 separate winners from 5 races and 4th to 8th only split by 5 points the Craftinsure Merlin Rocket Silver Tiller fleet is showing its strength and depth, but the accolades this weekend must go to Taxi and Tom winning on the same points as Jon Ibbotson and Matt Gifford, courtesy of Taxi’s two wins. Nick Craig and James Stewart were third with Will Rainey and Sophie Mackley fourth.

Report and photographs by : Piers Lambert

The Silver Tiller results from the Sunday only with 2 to count from the 3 races, changed the picture with Taxi and Tom first, Nick Craig and James second andJon Gorringe and Toby third.